Let me tell you three stories from Mahabharata, which shows Lord Krishna’s strategic moves during the war of Kurukshetra, all having a common theme. 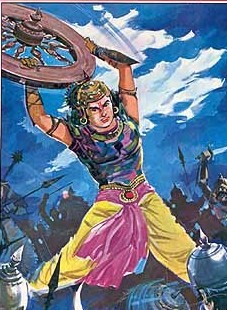 In spite of all that Krishna had to tell Arjuna in the form of Gita, Arjuna still developed weak-knees when it came to attacking/fighting seniors like Bhisma and Drona. In the war, there were no seniors and no brothers, all were adversaries, was something Krishna was not able to instil in Arjuna. Krishna noticed how, Arjuna would avoid fighting Bhishma and Drona and somewhere lacked the ‘killer-instinct’. This was noticed by Drona and understood Arjuna’s predicament since Drona had been Arjuna’s teacher and understood him well. So he made a plan to strike the Pandavas knowing well that Arjuna wouldn’t attack him. He planned that Arjuna would be made to chase and fight the massive Narayani army of Krishna (which was fighting on behalf of the Kauravas), while they collectively attacked the other Pandavas elsewhere. Once, Arjuna was busy fighting the Narayani army single-handedly, Yudhishtir was getting surrounded by all the stalwarts of the Kuarava army, in what was known as the chakravyuh, or an entrapment. Breaching it and coming out of it unscathed was an art which needed a skill that many did not have. Arjuna’s sixteen year old son, Abhimanyu, knew how to breach it, as he had heard his father tell his mother about it when he was in her womb, but did not know how to come out of it, as his mother had fallen asleep, by the time Arjuna reached the breaching part and seeing Subhadra asleep, he stopped there.

Abhimanyu agreed to breach the chakravyuh and Yudhishtir promised to rescue him once he was in. As decided, Abhimanyu managed to breach the entrapment and release Yudhishtir, but once out, the entrapment surrounded Abhimanyu and the brave lad was killed by all the Kaurava seniors as Yudhishtir could not breach the chakravyuh. Many say, that though Arjuna was fighting elsewhere, Krishna was aware of this and he allowed this to happen. Why? Because of an effect that Krishna wanted out of Arjuna. The death of Abhimanyu enraged Arjuna so much that he lost all semblance of war-rules and went on a rampage the next day. Krishna had managed to light the fire, needed in a warrior, but Arjuna had lost his son in the war. 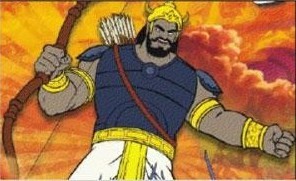 Just before the, the war of Kurukshetra began, Lord Indra under the instructions of Lord Krishna, came in the form of an ascetic and asked for two of the most precious thing from Karna, at a time, which Karna had reserved for doing acts of charity. This was the Kavacha, or the armour that he was born with and which also made him invincible. Seeing him dripping with blood as he cut off the armour which was part of his body, Indra was moved and gave him a spear, which would kill any one person he wanted to, and nothing, no craft nor magic could come in the way. Karna had kept the spear for his arch enemy, Arjuna. When Krishna came to know about this, he decided to unleash Bhima’s giant son, Ghatothkach on the Kaurava army, who ended up inflicting heavy casualty on the Kaurava army. With every step, he would kill thousands of soldiers and crush horses and elephants under his feet. With no option left, Duryodhan pleaded that Karna use his spear to stop the heavy destruction that the Kaurava army were facing and Karna had to give in and hurl the spear, killing Ghatothkach, but leaving Karna with less chances of killing his enemy, Arjuna.

Thus Krishna managed to save the life of Arjuna, but got Bhima’s son killed.

Story # 3 –
I will not delve into the details of the final story, as this has been discussed at length in my earlier articles. This pertains to the story of Barbareek (http://utkarshspeak.blogspot.in/2012/02/barbareek-aka-khatu-shyam-baba.html) and Iravan (http://utkarshspeak.blogspot.in/2012/03/iravan-south-indian-barbareek.html ). Both the characters were directly related to the Pandavas and were asked by Krishna to sacrifice themselves for the success of the Pandavas, which they did.

Conclusion –
So what are we to make out of these acts by Krishna?
Sons of the Pandavas, being made to die young, to save the lives of their fathers or to ensure the success of the Pandavas?
Was this fair on the part of Krishna who was also the master strategist in the war of Kurukshetra?
Was this inevitable or was there some other way out?
Or can we ascribe this to the age-old adage – “All’s fair in (love &) war”.

Posted by This is Utkarsh speaking at 10:07 AM