Cheating and corruption is not the prerogative of modern man only! It was prevalent during the ancient Olympics too, except that it wasn’t as widespread as it is now in our society. In the wake of recent match-fixing in the 2012 London Olympics, this subject gains more importance, so let’s see how such things were dealt in the Ancient Olympics. 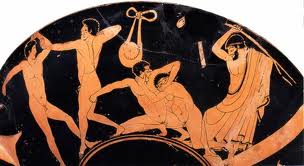 There weren’t too many occasions and opportunities of cheating as there weren’t too many events. However, one of the ways of cheating was applying oil in certain parts of the body during the wrestling bouts. Oil was banned during such events. Some other ways of cheating were shifting loyalties to another city-state other than the one they belong to. One was always supposed to represent his own city-state. But since victory was supposed to bring benevolence by the gods, many city-states tried to bribe the athletes from other states to owe allegiance to their states. Purposeful false start during the race was another way of cheating.

During the reign of the Romans, corruption was supposed to have reached its climax. Emperor Nero (of the fiddle-fame) is supposed to have bribed the judges to include poetry-reading in the schedule of the Games! The judges were also supposed to have declared him the victor in the chariot race, which he had not even completed! There are many such cases of corruption.

One of the first recorded cases of corruption involved a boxer who was supposed to have bribed three of his opponents to lose. He along with the others was fined heavily for the crime.
One of the punishments for such crimes was collection of heavy fine, which was used to make bronze statues of Zeus (known as Zanes), on which the details of the crimes were inscribed. Athletes prior to the games would walk past these Zanes to remind them of abstaining from such acts. There were also instances of flogging the culprits who were caught cheating. Sometimes along with the contestants, their trainers and their city-states were also fined for such acts of cheating.

Cheating was seen as something much beyond just a crime. The Ancient Olympics were religious games and prior to the games, each athlete was supposed to take an oath at the altar of Zeus. Breaking a rule was seen as an act of transgression and an insult to their gods, who were supposed to be the divine audience. Such acts were not tolerated and thus the severity of punishment.

Over time, with more games being introduced, such acts have given way to more modern and innovative methods of cheating. Today you have consuming of power-enhancing drugs, feigning genders and sometimes the judges being in cahoots with the athletes, the latest being fixing of matches. However, in the modern times, the fines are not very hefty, except for banning the athlete and revoking the medals, if won. However, public outcry and international shame is heaped on the athlete and his/her coach.

Posted by This is Utkarsh speaking at 9:57 AM