Independence Movement & the Myth of Markandeya 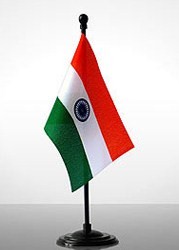 In an earlier article, I had mentioned how Hindu mythology has played a very significant role in the Indian Independence movement (dated Aug 14, 2010). The then freedom fighters had made a very creative usage of themes from mythology to express to their fellow-Indians the plight of the country.

The depiction of Bharat Mata, a personification of Mother Goddess, in chains has been a recurring theme in many a poster or old movies. With a budding printing industry, owned by the Indians, patriotic themes were transformed into images which were more evocative, expressive and communicative.

I would like to take one such instance which is supposed to have had a huge impact on people in those days, and that is the myth of Markandeya. According to this myth, Rishi Mrikandu and his wife Marudmati were devotees of Lord Shiva but didn’t have any children. They worshipped Lord Shiva and sought the boon of a son. Shiva gave them a choice of an intelligent son with a short span of life or a not-so-intelligent son with a long life. The Rishi opted for the first option and soon they were blessed with a son, who was named Markandeya, who was destined to die on his sixteenth birthday.

When Markandeya learnt about his impending death, he created a powerful mantra which is known as the Maha Mrityunjaya Mantra, an incantation which could win over death. On his sixteenth year, Markandeya embraced the shiva-linga and uttered the Maha Mrityunjaya Mantra non-stop. When the messengers of Yama, the god of death, came to take him they were unable to take him due to the power of the Mantra. This made Yama himself come to take Markandeya’s life. In his anger he threw the death-noose at Markandeya, which unfortunately fell on the shiva-linga. This angered Lord Shiva to no end and he rose from the linga to rebuke Yama. After a battle between Shiva and Yama, in which Yama lost, Markandeya was made immortal. Shiva is thus also known as Kalantaka or one who ends death. Since then it is also said that the continuous utterance of the Maha Mrityunjaya Mantra, keeps death away. 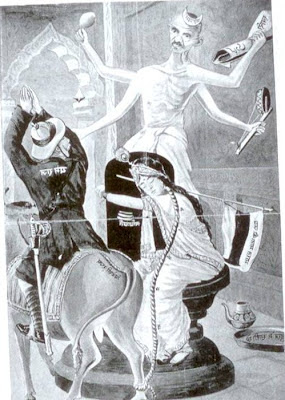 In the adjoining picture, we can see the same myth being used for a different purpose. A close scrutiny of the picture shows Bharat Mata in place of Markandeya who is seeking divine intervention from the evils unleashed by the British (who replace Yama here and are thus compared with death). From the shiva-linga emerges Gandhiji who was seen as a saviour in those days. Gandhiji is shown with four hands, and each hand has aspects associated with him, his charkha, the spindle and his most important weapon, his writings, which are shown in the form of a newspaper. The four hands and the crescent moon on his forehead lend him a divinity due to the enormous task he had undertaken, that of eliminating the British from India. Another significant change is that Yama’s bull gives way to a cow in the second picture, which is again a sacred animal for the Hindus and a British sitting on it would have raised the passions of an ordinary Indian adequately.

Such imagery was perceived as a necessity in the pre-Independence days, as many were not educated enough to read the articles written by the stalwarts of the Freedom movement. Also, many of the writings were either not printed and if printed, were soon banned. Further, in India everybody is well aware of their myths and any association with such myths always has an easy recall and an immediate understanding. Such deification might not go down well in modern India, but way back then; such instances were not seen as an act of sycophancy, but sheer need to communicate with the masses which was largely illiterate.

This is one of the best examples of how mythology served such an important function in our Independence movement, especially at the grass-root levels. India was a land of many languages and writing and translating articles in many languages to all sets of people was a herculean task when information dissemination was not a simple activity as it is today. In such a scenario, a single picture could do what thousand words couldn’t.

With this, here’s wishing all my readers a very happy Independence Day!!

Posted by This is Utkarsh speaking at 8:35 AM