The picture given below is considered to be one of the first, if not the first, usage of mythology in India’s nationalist movement. Many might differ with me, when I make this statement about the usage of the above for a ‘national movement’, but I will explain that slightly later. 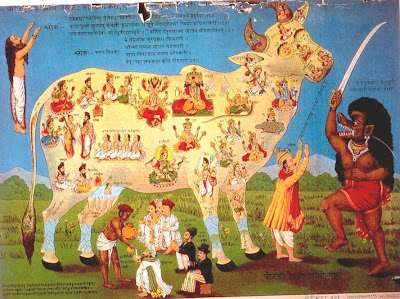 Better known as the Chourasi Devonwali Gaay, or ‘the Cow of 84 Deities’ was part of a campaign launched by the founder of Arya Samaj, Swami Dayanand Saraswati. In an article titled Gokarunanidhi, (Ocean of mercy to the cow), in 1881, Swamiji strongly advocated the ban of cow-slaughter which was widely prevalent then. The article soon found lots of supporters and people spread to different parts of the country with pamphlets and pictures advocating a ban on the slaughter of cows. This led to a larger awareness and the formation of Gowrakshak-samitis, Cow-protection groups and creation of gow-shalas, or cow-refuges, for the old and abandoned cows.


Soon this awareness drive got labelled as the Cow Protection Movement and the British took note of the support that it was gaining. They smelt a potential threat in this and seeds of discord were sown. The Muslims were agitated and branded this movement as an anti-Muslim movement and India recorded its first communal riots in 1893, in Azamgarh district of Uttar Pradesh, which took the authorities about three days to get situation under control.


Many see this movement as a religious movement of sorts which was obviously spearheaded by Hindus. The reasons of my disagreement, as mentioned at the beginning is based mainly on the fact that Swami Dayanand Saraswati, himself was against the form of Hinduism which preached idol worship and the prevalent practice of child marriage, widow celibacy and the caste system in the name of religion. He believed in the Hinduism of the Vedic times which did not accord any superiority to the Brahmins which was a later manifestation of the religion.


The British were also aware that the movement was politically motivated and some even felt that after the 1857 Mutiny, this movement was the next big challenge for the British, since it had spread across the country. Swamiji had tried to build a secular movement around it and he also got support from the likes of Bal Gangadhar Tilak and others, but it became an unfortunate cause for communal rivalry.


The selection of cow was not just to get the cow-slaughter stopped. Cow had always had a very special place in the Hindu religion right from the Vedic times. In the Rig Veda, the cow has been equated with god. According to a myth from Bhagavata Purana, Bhoodevi or the earth goddess used to nourish mankind in every aspect of life. But man started exploiting earth for more and more, till Bhoodevi could bear it no more. She took the form of a cow and ran away which led to famine on earth, since the nourishment to plants was missing. Vishnu in the form of Prithu descended on earth and tried to convince her, but Bhoodevi was not ready to pardon mankind for such mindless exploitation. Prithu convinced her that man would respect her and he himself would come to earth in future and teach man to love and respect cows. Bhoodevi, satisfied agreed to return to earth and from then onwards, as the beloved of Prithu, she came to be known as Prithvi. Vishnu kept his word and as Lord Krishna took birth in the family of cowherds and is also known as Gopala and advocated veneration of cows.


The picture given at the beginning of this post also illustrates the same and true to the secular nature, the cow showers its bounty on all, irrespective of man’s religion. This is shown at the bottom of the illustration by a man handing over milk to Hindus, Parsi, British and Muslims alike. The slaughterer is not shown as one belonging to any religion, but a demon or an asura, once again depicting the killer in negative shade. Many nationalists have opined that the asura is to be understood as the common force of British, but this is a debatable point, since it already shows a British being offered milk.


In simple terms, the use of a cow could be seen as a simple symbolism where the cow is shown as mother earth which is equated to the nation at large. The slaughter of cow was to be seen as the killing of the nation by foreign rulers and the people of the country were asked to stop it. The above is just another example of the multifaceted application of mythology, the treasure-trove of civilisation. From personal to national, it has far-reaching manifestations and usage.

On this day, here’s wishing all my readers a very happy Republic Day!!


* Pic Courtesy - Wikipedia
Posted by This is Utkarsh speaking at 10:17 AM