Was Gandhiji an Avatar? 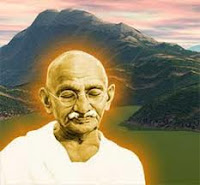 On the day of Mahatma Gandhi’s assassination, Martyrs' Day, the above question comes to mind, which is also the very basis of what we call the ‘deification of a hero’ in the studies of Comparative Mythology.


Would generations after a few hundred years believe, that a man managed to unite a diverse and large country, which was many small countries by itself, achieved freedom from British and that too on the principles of ahimsa or non-violence? Many historians and scholars have found people in villages to believe that Gandhiji was an avatar of god – how else could a person perform such enormous task of throwing the British out, when they were firm for more than two hundred years? 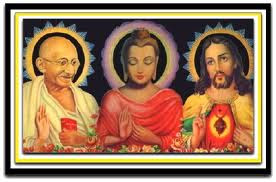 Many have compared Gandhiji with Gautam Buddha, probably for the glaring similarities between the two –

Just what am I up to, is what many might wonder. Why am I hell-bent on deifying an individual from History?


The whole idea is to show how heroes of the past have got deified. This is exactly how many of the ‘gods’ could have got deified in the course of the development of civilization. Miracles and unbelievable deeds get credited to them; halo’s appear in their pictures. The classic example in mythology is that of Indra from the Vedic times, where many believe that Indra was a mortal hero who got deified during the Vedic times. Many also feel that the epics Mahabharata & Ramayana could have some roots in reality and many characters actually existed.


The following pictures have become part of the lore. The picture below is titled as “Gandhiji ki Swaryatra” – Gandhiji’s journey to heaven, by Narottam Narayan Sharma in 1948 where Gandhiji is shown above Nehru and Sardar Patel and being taken in some sort of celestial carrier by two garlanding apsaras after his death. Many other leaders are shown mourning. 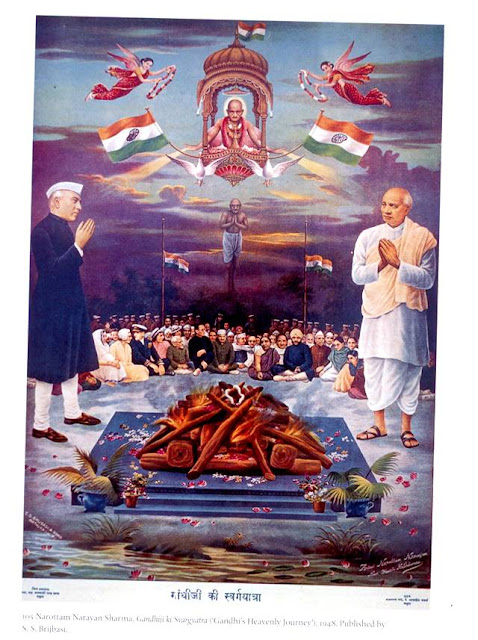 The following picture shows a pensive Gandhiji being blessed by Lord Ram, a deity Gandhiji used to worship, made more famous by his last words “He Ram”. This image, set up in modern times (modern buildings and manicured lawns) with Lord Ram in his traditional attire is also seen as the ‘appropriation of Gandhiji in the Vaishnavite tradition of Hinduism’. 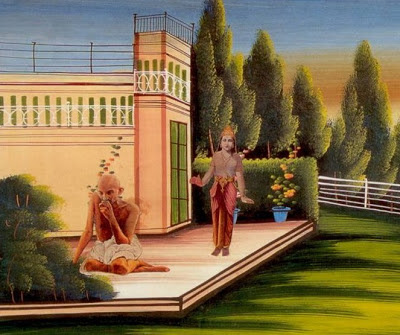 Besides the above, there are many such pictures which deify Gandhiji and many other freedom fighters like Bhagat Singh, Netaji Subhash Bose to name a few.


What is interesting is that this theory of deification of heroes is not new. I would rather say, that it has only slowed down in the modern times. What were once mortals have either been raised to the status of gods or changing times have made their deeds so unbelievable, that such deeds could only be the domain of deified heroes.


To conclude, I would like to quote what Albert Einstein had to say about Gandhiji on his 70th birthday - “Generations to come, it may well be, will scarce believe that such a one ever in flesh and blood walked upon this earth”.


As lawyers would say – I rest my case!

Picture Courtesy - 'Photos of the Gods': The Printed Image and Political Struggle in India