From today starts the famous and one of the largest religious congregations of the world, the Kumbh Mela (the fair of the pot). This event attracts millions of people from across the world and this year it could be much more as it is also the Maha Kumbh, the Great Kumbh, which takes place once in twelve years.


This event, as we all know has its origins in the famous mythical episode of the Amrita-manthan or samudra-manthan (churning of the ocean). But what many might not know is the reason for the churning. According to a legend, once Lord Indra came across Sage Durvasa (better known for his infamous temper). On seeing Indra, Sage Durvasa took out a garland from his neck and gifted it to Indra. Indra in his arrogance put the garland on his elephant, who obviously unaware of its importance trampled it under its feet. Seeing this, Sage Durvasa was angry and cursed Indra that he and his ilk, i.e. the other gods would lose all their strength and the position, due to this act of arrogance.


Soon, the gods were devoid of any energy and strength and seeing this, the asuras, attacked them and got the better of the gods. The gods assembled and sought help from Lord Brahma, who suggested the churning of the ocean, from which, would emerge the celestial physician, Dhanwantri who could save them with his divine potion or nectar, better known as amrita, the elixir of immortality. However, for this they would need the help of the asuras who were very strong. A discussion was held between the gods and asuras and it was decided that all would get a share of the amrita. 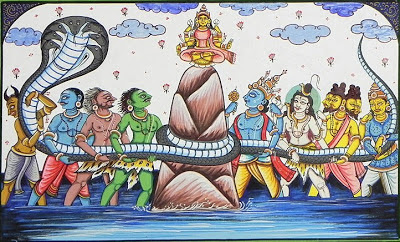 On churning, many riches emerged and so did Dhanvantri with the pot of amrita. On seeing this, the asuras tried to gain control of the pot, but Vishnu took the form of Mohini, the enchantress and ran away with the pot. While Mohini was trying to save the pot from the asuras, the pot spilt some drops of the amrita on Allahabad, Haridwar, Ujjain and Nashik, which have become the famous places of the Kumbh fair. It is said that the gods and the asuras fought for twelve days, which was equivalent to the twelve years on earth to gain control of the pot.


In the war between the gods and the asuras, three gods, Sun, Moon and Jupiter played a very important role in protecting the pot from the asuras. Since then, the Kumbha Mela is held to commemorate this event, and the dates are calculated on the basis of the planetary positions of Sun, Moon and Jupiter. The four places where drops of nectar had been spilt, are supposed to acquire divine powers on these days and bathing in the rivers on these days, washes away all the sins and one can achieve salvation. The fair is held every four years in the above regions and every twelve year is the Maha-Kumbh, like the one which is being held in Allahabad this year. 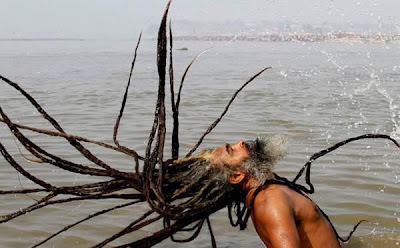 I don’t know if the sins are washed away on this day or not, but the massive congregation of believers on this day has something to do with faith. Braving the chilling winter and dipping in the cold waters can only be an act of faith and hope for salvation. How many achieve salvation is a statistics for god to maintain, but the Kumbh is definitely a visual treat even for the non-believer. It must be something, which made Mark Twain, in 1895 to comment –


“It is wonderful, the power of a faith like that, that can make multitudes upon multitudes of the old and weak and the young and frail enter without hesitation or complaint upon such incredible journeys and endure the resultant miseries without repining. It is done in love, or it is done in fear; I do not know which it is. No matter what the impulse is, the act born of it is beyond imagination, marvellous to our kind of people, the cold whites.”