Kumbh Mela and the Naga Baba’s 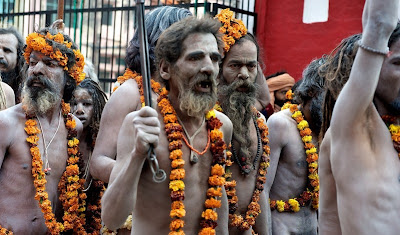 In the last post, we discussed the origins and significance of the massive Kumbh Mela which is currently being held in Allahabad, India. Its sheer enormity and the gathering from all over the country and parts of the world, has intrigued many a foreigner, who come down to attend every Kumbh Mela in hordes. Besides the religious fervour, which is at its full display, there is another very intriguing aspect of the Mela and that is the Naga Baba’s, or the naked ascetics. 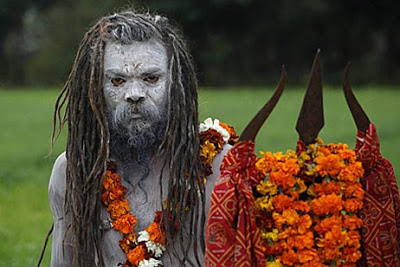 The Naga babas are notable by their appearance, they are naked, and have long, knotted and unkempt hair, with ash smeared all over their bodies. They do not wear a shred of cloth even in peak winters and keep themselves warm by smoking ‘chillum’ or local marijuana. Many of them carry trishul or the trident carried by Lord Shiva as they are all followers of Lord Shiva. Many are known to perform inhuman tasks and some of them are known for doing things that the modern day civilisation might term weird, like standing on one leg for decades or using only one hand, or sleeping on a bed of sharp nails or standing on their heads for days, so on and so forth.


If one observes them closely, one can find in them all aspects of Shiva, except for the nudity. The nudity is a sign of renunciation of all material possessions and a sign of lack of any human inhibition. It also shows that they have parted with worldly pleasures and nothing arouses them, both sexually as well as emotionally and are at one with their god. This is another aspect which distinguishes them from their Lord (Shiva), who is a much married and a family man with wife and children. However, this renunciation of the baba’s is to end to the cycle of life and death and attain salvation. The reverence given to them can be seen in the fact that the first dip in waters during the Kumbh Mela is allowed to them. 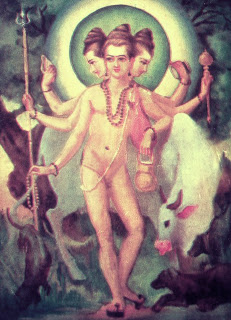 The Naga baba’s consider the god Dattatreya as their Guru (who was considered to be the first naga baba) and the Adi Shankaracharya is supposed to have organised them in akharas, or camps, some of them being the Udasins, the Gorakhnatis, the Aghoris and the Yogis amongst the main ones. They were brave and did not care much for their lives and thus have been part of regiments fighting the early Mughals and later British. This streak of aggression is found in many of these babas even today, and thus often referred to as the warrior-ascetics.


If anybody tells me that they get photographed due to their nudity, then I would like to say, that there is much more nudity (and aesthetic at that), elsewhere and the Naga babas are definitely not satisfying that voyeuristic need. It is their unique lifestyle and the way they are that arouses both a sense of wonder and a squeamish suspicion about the babas. Needless to say, that they also have a heavy following in terms of disciples many of who are amongst the rich and famous of India. 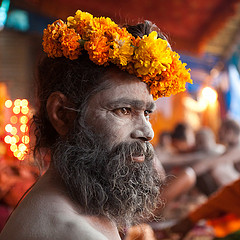 Many feel threatened and embarrassed by this uncanny focus on such people during the fair. To this I only have to say, that these men are the followers of an ancient faith and live in the past out of their own volition and the impression that they create cannot be interpolated on an entire country or a philosophy which has many aspects to feel proud of. I don’t see this even as an aberration, but just another aspect of the diverse fabric of a philosophy, better known as Hinduism.