Let me tell you about an interesting observation. But first stories, which many of us might be quite familiar with.

The first one is from the epic Ramayan, related to the Kishkindha episode. Sugriv and Vali were brothers and Vali was the king of the vanars in the Kingdom of Kishkindha. He had a boon, that he would absorb half the strength of his opponent in a fight/battle. Once a demon by the name of Dundubi threatened him to a duel, but when Vali accepted it, he developed cold feet and ran away. Both Vali and Sugriv chased him till he entered into a cave. Before going inside the cave, Vali asked Sugriv to wait for him outside the cave and in case he saw blood coming out of the cave, then he should assume him to be dead and return to the kingdom and crown himself the King. After Vali had gone inside the cave, Sugriv heard loud sounds and soon he saw blood coming out of the cave. Sugriv assuming that his brother was dead, bolted the entrance of the cave with a boulder and came back to the kingdom to inform all that their King was dead and assumed the throne.

Soon Vali managed to kill the demon, and came back to his kingdom to see Sugriv crowned as a king. This enraged him and he rushed to kill Sugriv. When Sugriv tried to explain that he had done as instructed to him, Vali would not hear and rushed to kill him. Sugriv had no option but to escape from there and live in exile. Vali in the meanwhile also forcefully took Sugrivs’ main wife Ruma. Later when Ram and Lakshaman came there in search of Sita, they met Sugriv and assured him of their support. 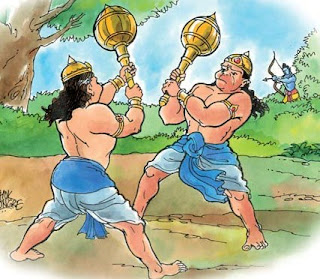 As planned, Sugriv challenged Vali to a duel in the forest and while the two were fighting, Ram hid behind a tree and shot an arrow and killed Vali. This singular act is seen as an unfair blemish in an otherwise spotless character of Ram. (We will not get into the details of the unfairness and will leave the story here.) 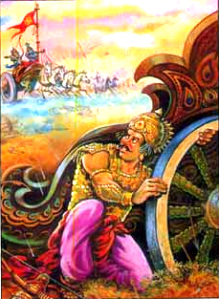 In the epic Mahabharata, during the war of Kurukshetra, again two brothers were pitched against each other, Karna and Arjun. During the war, when Karna gets off the chariot, to release its wheel which was stuck in the ground, Krishna coaxes Arjuna to kill Karna, even though Karna was unarmed. This too is seen as an unfair act by Krishna and he has been criticised for the same.

Am I telling you stories that you know?

Well now for a very interesting comparison in both the tales related above.

What is more important is that what was done in the Ramayan was reversed in an effort to balance in Mahabharat, a poetic justice of sorts for the fathers, Indra and Surya!

Isn’t this interesting? Two epics, written by two different sages, during two different ages (Ramayan during Treta Yuga and Mahabharata during the Dwapar Yuga) but enabling a balance of justice.

Finally to conclude, Vali before dying is supposed to have told Ram that shooting him from behind and that too when he was fighting someone else was unfair. To avenge this unfairness, Ram allowed Vali to be reborn as the hunter Jara during the dwapar yuga (Mahabharata) who shoots an arrow at Krishna’s feet thinking him to be a deer, leading to the death of Krishna!

Doesn't this also depict the declining standards of morals? What was unfair during Ram's times and allowed to avenge later, is missing during Krishna's times?

Posted by This is Utkarsh speaking at 10:33 AM