The crime of Julian Assange

According to Greek Mythology, Sisyphus was the King of , who had some heroic deeds to his credit, but was punished by the gods for the heroism.

Sisyphus was witness to one of the escapades of Zeus, the King of gods. Once he saw Zeus kidnap one of the river nymphs and when the river god came looking for his daughter, Sisyphus revealed the location where Zeus had taken her. Zeus was outraged at this impudence, and as a punishment sent Thanatos, the god of death, to take Sisyphus’s life. But Sisyphus was too smart and decided to cheat the god of death, so that no mortal would ever have to encounter death! He managed to chain the god of death, till the gods came to know about it and sent another god to get the release of Thanatos. After some more events, all the gods were upset with Sisyphus, at his audacity. His crime – first, he revealed the secrets of the King of gods, Zeus, and second, he tried to keep death away from mortals. 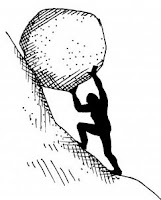 His punishment was that he would have to eternally push a big boulder up a cliff, till he managed to put it on top of the cliff. If he stopped, then the boulder would crush him, and if he reached the top, it would roll off on the other end, and he would have to start again this never-ending task.

Doesn’t this sound very familiar to a recent hero, who too is being punished for revealing secrets? Julian Asange.

Asange (Sisyphus?) too has committed the ‘crime’ of revealing the secrets of the Big Brother (Zeus?). As a punishment for revealing the secrets, (Thanatos?) has been let loose behind him to try him for a crime, which is hardly a crime. His other crime, he supports the freedom of press and speaks against censorship (death?). For this crime, he is being tried under a different crime (alleged sex crimes). Are Big Brother and its friends, going to put him on trials after trials, so that he does not come out of them, and does not try to do them more harm, by revealing more secrets? Zeus didn’t have as many secrets as the modern day governments have!

But then, this is no Greek Mythology and we are no more mere mortals. Shouldn’t we take up the cudgels for a fellow mortal who is revealing the secrets of another set of mortals, who are on the pedestal, thanks to us? If this is a debate of freedom of speech, vs. censorship, then let us have the debate, but not hang the whistleblower before trial. In today’s time, let us behave like men, not like ancient Greek gods.

On a lighter note, to quote somebody, if anybody needs to be tried, then it is the condom manufacturer for selling condoms that leak, not the head of WikiLeaks. Let WikiLeaks, continue to leak!!
Posted by This is Utkarsh speaking at 11:06 AM