We have till date read about real birds like peacocks, roosters, owls, etc. and their mythical symbolism. Today we will talk about mythical birds – birds that existed only in myths. Creative, unbelievable and magical, to say the least! 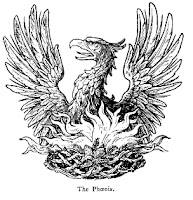 Phoenix is the most famous of all the mythical birds. Phoenix was a bird which resembled an eagle, found in the Greek and Egyptian myths. According to the myths, a Phoenix could live up to 500 years and then it would build a nest of fragrant herbs and spices and set itself on fire. However, a new bird would emerge from the ashes. The act was more of a symbolism for immortality or the concept of rebirth. It is from this myth that we derive the English phrase – to rise like the Phoenix.

Harpies were Greek mythical birds, which had the body of birds with the faces of ugly females. They were agents of punishment and were cruel and violent. Harpies, who were three sisters in all, were actually the personification of the destructive nature of the winds.

Griffins again were Greek mythical birds, with the body of a lion and the head and wings of an eagle. Their main role was to guard treasures.

Hoyl was a mythical bird, in the Garden of Eden. According to the myth, hoyl was a bird which did not eat the forbidden fruit that both Adam and Eve had eaten. As a reward, the bird was granted immortality of sorts. The bird never dies, it just goes off to sleep, till it is destroyed by a divine fire, in which an egg remains, and from that comes out a full grown hoyl.

Thunderbird was one of the most important figures in the Native American mythology, representing thunder, lightning and storm. The Thunderbird was also the protector of human beings from evil spirits. According to the myths, the bird caused thunder by flapping its large wings and it caused lightening by opening and closing its beak and eyes. The natives also believed that the Thunderbird was also involved in the creation of the universe.

Garuda was a mythical bird from the Hindu mythology. This bird was eagle faced and was also the vahana of Lord Vishnu, but was also a minor deity in its own right. Garuda has many myths associated with itself and is very well known for its hate towards the serpents or nagas, and also has a role to play in many of the major Hindu myths.

Firebird was a mythical bird with golden feathers and crystal eyes that appears in the Russian folklore. It was the bird which would help Ivan the son of the Tsar and a number of tales have been woven around the benevolence of the bird.

Yatagarasu was a three legged Japanese mythical bird. Except for the description of three legs, there isn’t any mention of the nature of the bird. However, scholars have surmised that it looked like a raven or a crow. In Japanese myths, the appearance of Yatagarasu was considered to be an evidence of divine intervention. In some myths, Amaterasu, the chief deity is said to have changed into this bird and at times the vice versa. Nothing much however, is mentioned about this bird. The Chinese too have a similar three legged crow, known as Yangwu, which though has a description of a crow, is not black, but red.

Roc – or Rukh was a legendary bird from the Arabian mythology. The Roc has been described as an enormous eagle looking bird, often white, with huge wing-span (eight yards each), but with unbelievable strength, whereby it could lift an elephant in its talons. It used to lay massive sized eggs. A mention of this is found in the famous stories of Sinbad the Sailor. Many feel that this could have been a bird from the times of the dinosaurs, but there is no analysis on this.


The mythical birds, as mentioned earlier, were a creative delight. The earlier thinkers gave it a form and meaning as they saw or understood nature or the causes of nature. These birds were definitely not major parts of the myths, with a possible exception of Quetzalcoatl, who was amongst the prime deities, but were significant with their acts of benevolence, or impediments, or inherent symbolism. They added that extra aspect of fantasy to the myths, which makes the myths so endearing in its totality.
Posted by This is Utkarsh speaking at 10:54 AM