The Gift of Fire

On earth, both started their creations. Prometheus made man, in the shape of the gods and Epimetheus made animals. On creation, Epinetheus expended all the gifts to be given, on the animals, without much left for man. Thus the animals were endowed with swiftness, cunningness, physical strength and protective fur. This left Prometheus literally nothing to be given to man as endowment. So Prometheus decided to teach man, the art of fire, which was known only to the gods in Mount Olympus. This angered Zeus to no end.

To show his gratitude for creation, Zeus sent a beautiful maiden by the name of Pandora, along with a box, with an instruction that the box should not be opened. Prometheus knew that Zeus was up to something and so he declined the gift, but Epimetheus not only accepted Pandora, but even got married to her not heeding to Prometheus’s warning. 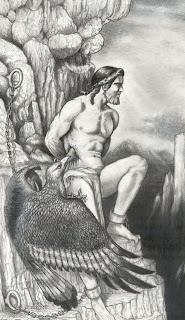 Zeus was further offended by Prometheus’s refusal of the gift from the gods, and so he decided to punish him by chaining him to a rock in the Caucasus Mountains where every day and eagle would come and eat his liver, leaving only at night, when the liver would begin to grow again, only to be eaten again the next day. (Modern science tells us, that amongst all the body parts, liver is the only organ which has regenerative powers, seems as if the ancient Greeks knew about this aspect!) 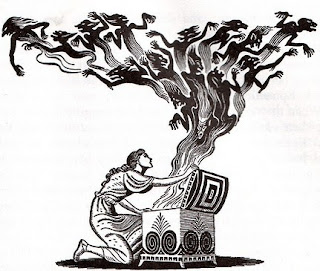 On the other hand, Pandora got very curious to know what was in the box that she was not supposed to open. One day, the curiosity got the better of her and no sooner she opened the box, out came all the miseries – vice, labour, old age, insanity, illness and death. Pandora however, managed to shut the box, just before ‘hope’ could escape, and thus today amidst all the miseries, it is hope that sees man through. (It is from this act, that we get the phrase ‘opening a Pandora’s box’).

So just as Pandora weakened man with all the miseries she let loose, fire managed to see mankind through civilisations! In Greek Mythology, Prometheus is regarded as a hero for rebelling against Zeus and giving mankind the gift of Fire at the cost of risking his life.
Posted by This is Utkarsh speaking at 10:20 AM