Thanatos is the Greek god of death and is the son of Nyx (night) and Erebos (darkness) and is the twin brother of Hypnos (sleep). As god of death, Thanatos’s siblings are Geras (old age), Oizys (suffering), Moros (doom), Apate (deception) and Nemesis (revenge). The association of Thanatos is with all things grim and negative. After all what else is death to a mortal? But, then Thanatos also has lent its name to Euthanasia – where ‘eu’ stands for ‘good’ and Thanatos for death – thus implying ‘good death’. Sometimes Thanatos was associated with peaceful death, as Keres stood for violent deaths!

A recent Hindi movie has fuelled an ongoing debate on Euthanasia, or ‘mercy-killing’ in common parlance. Let us see how the subject is seen in our myths.

Hinduism is aware of Prayopavesa, which stands for starving to death, in Sanskrit, or death by giving up food and water. However, Prayopavesa can be performed only by someone who has no desire to live or no responsibilities left towards the family or society at large and at times in cases of terminal disease. The phrase ‘desire to live’ is quite dubious as a reason, but we will leave this for the time being. According to the scriptures, the Bhagvata Purana was narrated when King Parikshit was observing Prayopavesa. A similar practice is found amongst the Jains, which is known as Santhara.

Another reference to such an act is Mahaprasthana, i.e. great departure, which leads to death. This was undertaken by those who did not believe in taking lives (even if it was their own), and so one proceeded on Mahaprasthana, which would eventually lead to death, due to reasons, not known or not found out ever.

History is witness to such acts by the likes of Veer Savarkar and Vinobha Bhave. Veer Savarkar is supposed to have written in an article, titled - 'Atma-hatya or Deh-tyaag', saying that Suicide was taking one’s own life, but renouncing life when it was not capable of functioning properly was a different matter altogether. Buddha and Mahavira are also supposed to have ended their lives on their own. 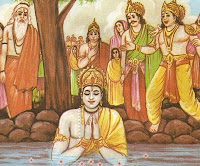 Are there any specific references of embracing death (if we simplify the term Euthanasia) in our Mythology? According to Ramayana, Mother Earth parted under Sita’s feet and she merged in the ground. Could this fantastic idea be an euphemism for embracing death? It further states, that Kush tried to save his mother, but failed. Again Valmiki’s Ramayan mentions that Ram took ‘jal samadhi’ by simply walking into the river Sarayu, but when Hanuman decided to join him, Ram stopped him from doing so. This shows that somewhere, embracing death was limited to few people and not people at large.

Another obvious reference to embracing death is that of Bhishmapitamah in Mahabharat. Though he had the power to choose when to die, he chose it after much suffering. A bed of arrows could imply severe bodily trouble, and embracing death, when he could take it no more.


Some compare Euthanasia with Suicide, calling it Legal Suicide. However, it is here that I beg to differ. Suicide is a matter of impulse, which is never a well-thought out decision, by a loser (be it loss of faith, trust, or material). But Euthanasia is a well-thought out decision and at times gives a chance to make a mid-course correction (if it is going the Prayopavesa way for example). But Suicide does not give you such options. Also Euthanasia is taken only under cases of severe or terminal illness. It is important to mention that Euthanasia is carried out by a medical practitioner, which again is a key differentiator from Suicide. Euthanasia is not a stand-alone concept; there are other issues like Voluntary vs. Involuntary Euthanasia, Active vs. Passive Euthanasia, which is beyond the scope of this article.

The subject has moral and ethical connotations and the debate needs to continue. I am not making a case for Euthanasia, but was only trying to see if there are any references available, which is not a justification for the act though. I insist that I am not posturing here, but only putting some facts on the table, or should I say, on your screens!
Posted by This is Utkarsh speaking at 10:57 AM