Greek mythology has Eros and sometimes better known as Cupid as god of Love. Eros is a handsome man (the word "erotic", meaning sexual love, comes from his name), who is the son of Aphrodite, who had fallen in love with Psyche. However, it is as Cupid that he is better known. Cupid is a small winged child, who is both very good looking and extremely mischievous, with a penchant for shooting love arrows blindly (thus giving the phrase – love is blind). The ‘victim’ of his arrows is supposed to fall in love with the very person they see after being hit by the arrows. Cupid is sometimes shown riding a dolphin. 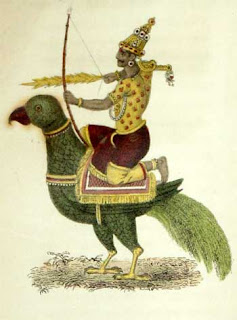 Hindu mythology has Kamdev as the god of love, and he too is handsome, moves around with bow made of sugarcane, strung with a line of bees and his arrows are flower-tipped with desire. His wife is Rati (passion) and together they create love, desire and passion. Kamdev’s is shown riding a parrot. Kamdev is supposed to have been born from Lord Brahma’s heart and his main supporter is Vasanta (Lord of Springs).

According to a myth, Lord Shiva was engrossed in deep meditation after the death of Sati and a mighty asura needed to be killed by Shiva’s offspring. Shiva needed to be disturbed from his meditation to even look at Parvati. All the gods requested Kamdev to wake him up by shooting his desire-filled darts. Kamdev knew the risk on hand, but complied with the request. When Shiva was disturbed, he was angry and when he found out the god responsible for this, he opened his third eye, and reduced Kamdev to ashes. But by then Shiva was very agitated and was being overcome with desire and love for Parvati, whom he had seen on opening his eyes. Later, on seeing the sad state of Rati who could not come to terms with the outcome of such a noble act by her husband, Shiva agreed to restore Kamdev, but only in spirit, which implied that Kamdev did not represent only physical love, but also true love and affection. Thus Kamdev is also known as Ananga, the bodiless! His other names are Madan (one who intoxicates with love) and Manmatha (one who agitates the mind with love)

We can see that both Cupid/Eros and Kamdev have similarities. Besides being handsome and evoking love by shooting arrows, they too have their own love stories. Eros with Psyche and Kamdev with Rati. Overtime, the love they evoke has gone through a metamorphosis in its implications, but the original response of their arrows continue to be carnal love, as we see in the case of Eros himself and Lord Shiva and Parvati. Mythology has never looked down on carnal love; rather there are numerous instances of such love in all mythologies. However, with the rise of man establishing moral standards, such examples were given a coating of philosophical interpretation.
Posted by This is Utkarsh speaking at 10:10 AM