All of us know how Lord Krishna stopped Arjun from fleeing the battlefield, just before the battle of Kurukshetra in the epic Mahabharata. A lesser known myth tells us of Krishna himself doing the same at one point of time, but with a difference.

After Krishna killed his uncle, Kansa, he installed Kansa’s father, King Ugrasen on the throne of Mathura as the King of the Yadavas. The killing of Kansa had upset Kansa’s father-in-law, the mighty and powerful, King of Magadh, Jarasandha, since two of his daughters were married to Kansa and were now widows. Both the daughters returned to Jarasandha and urged their father to avenge their plight.

Jarasandha decided to kill Krishna and laid siege on Mathura. The army of the Yadavas was no match to that of Jarasandha’s huge army, but the Yadavas managed to send them back under the able leadership of Krishna. Jarasandha is supposed to have attacked Mathura more than seventeen times, each time inflicting a huge blow to the Yadavas and the casualties kept mounting and soon the Yadavas had an army which was only name-sake.

It was then that Krishna decided to leave Mathura and got Lord Vishwakarma to build a new city for them. Vishwakarma made a walled-city called Dwarka, the city with gates, which was well fortified and safe on an island on the West. However, the Yadavas saw this eviction from Mathura as an act of weakness and protested. Krishna explained to them, that he was capable of killing Jarasandha, but his time had not come, and he would not do anything which was against destiny. Also, Jarasandha’s enmity was not with the Yadavas, but with him. Krishna felt that risking the lives of so many and inflicting casualties on the community was unfair. After a lot of deliberations, King Ugrasen agreed with Krishna’s views and they decided to shift.

Soon Jarasandha laid siege, and this time set the entire city of Mathura on fire. But Krishna and others had already slipped out of Mathura. This singular act of his, earned him the epithet of ‘Ranchod-rai’, one who flees from the battlefield, or the deserter. Time and again, Krishna has been taunted for this desertion and even called a coward in Mb, but many see this as an act of practical sense. Putting an entire community at risk for what was a personal enmity was unfair. Also, it is always better to fight an equal war and when one is ready. The Yadavas were not ready and were no match to the mighty army of Jarasandha. Balarama, the elder brother of Krishna had protested to this plan of desertion, but Krishna prevailed, much to the dislike of Balarama and many others.

Fighting in battles is not just an act of bravery, but also that of strategy. Jarasandha never attacked Dwarka which was well fortified, proves the point that Krishna’s decision was that of good war strategy, which in the long run led to no casualties and no bloodshed. His decision to take on Jarasandha later when he had able support of warriors worthy of Jarasandha, proved beneficial to the entire community.

A single epithet of the deserter did not reduce his importance, rather only enhanced it as a master-strategist with a practical sense rather than a misplaced sense of patriotism.

The critical difference of Krishna’s desertion and Arjun not wanting to fight the war of Kurukshetra, is that Arjun had developed cold feet and was having moral dilemma whereas Krishna’s desertion was part of war-strategy. You can read more on this in one of my earlier articles  Arjuna's Dilemma . 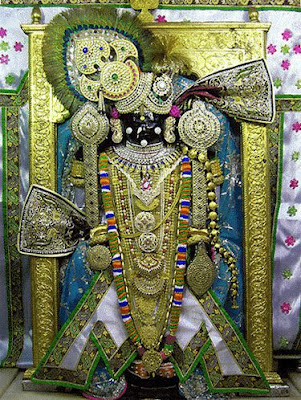 There exists a famous temple of Ranchod-rai in Dakor, Gujarat. The formation of the temple and the idol of the temple have its own rich mythology, which will be for some other day.

So did Krishna ever manage to eliminate Jarasandha? That too is for another day!!!