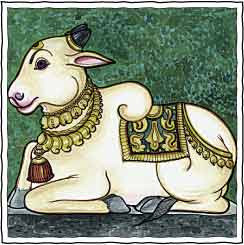 Last time we read about Shiva as the Bull. But the best known bull is Lord Shiva’s vahana, the Nandi bull. A recent slip of my finger over my TV remote took me to a supposedly popular serial on Lord Shiva. One of the characters was being referred to as the Nandi bull and his only resemblance to the Lords vahana was a pair of stretched ears. The character depicted in the serial was nothing short of an apology of the mythical character, Nandi. This article is only set straight the record and an attempt to correct the sorry state of a majestic mythical character. 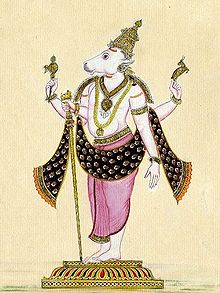 Unlike many vahanas of the prominent gods, Nandi is not just an appendage to the deity. Nandi is a character in its own right and has mythology attached to it. (Besides Nandi, Garuda, Lord Vishnu’s vahana is probably the only other vahana to share such distinction, if I may add). Different Puranas have mentioned about Nandi and a lot has been written about it. Though Nandi is depicted as a bull, many say that Nandi was a deity in his own right and was one of the door-keepers of Lord Shiva in his abode. He is also considered to be the chief gana (follower) of Lord Shiva and is the main disciple of Lord Shiva. Nandi in earlier times was imagined in the form and structure of Lord Shiva, except that he was bull faced. As an anthropomorphic deity, he had the body of a human, with four hands and a face of a bull. However, with time the human figure transformed into a permanent white bull.
A number of legends are associated with Nandi. Some say that Nandi was the son of a sage who got him by the grace of Lord Shiva, while some say that he was born out of Lord Shiva’s sides and later given to a sage, who brought him up. There is an interesting legend related to Nandi. Once when Shiva and Parvati were playing dice, Nandi was asked to arbitrate. However, Nandi declared Shiva as the winner during a dispute, when Parvati was the clear winner. This angered Parvati and she cursed him to suffer from a debilitating disease. Nandi is supposed to have made an emotional justification for his unflinching support to his Lord and the alleged bias was to be viewed as just another sign of his devotion to the Lord and nothing else! Parvati was moved by his explanation and suggested that during the next Chaturdashi if he offered what pleased him the most to Lord Ganesha, then he would be cured of his disease. It is said that on that day, Nandi offered green grass (the staple of a bull) to Ganesha and was soon cured of his disease. This act is considered to be the the genesis of the practice of offering ones choicest of foods on Chaturdashi to Lord Gannesha, whose other name is Ganapati, head of the ganas.

Another legend has it that during the amrit-manthan, it was Shiva who came forward to consume the poison (halahal) that came out of the churning of the ocean. While Shiva was drinking the poison, Nandi saw a few drops falling from his mouth. Lest the drops fall on earth, Nandi took them in his mouth. When everybody saw it and expressed their concern about Nandi’s drinking the poison, Shiva is supposed to have said, that nothing would happen to Nandi as he had all his powers and his protection. Today Nandi is found guarding all Shiva temples. In many south Indian temples, there is a custom of whispering ones wishes in the ears of the idol of Nandi, hoping that Nandi would carry it to his Lord. 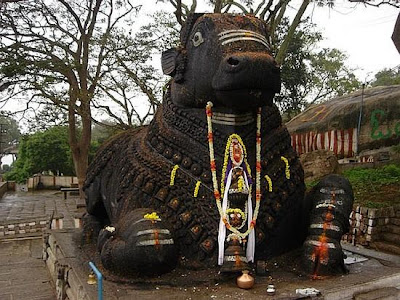 The importance of Nandi can be found in the fact that in Bangalore, there is a temple which is entirely dedicated to Nandi. Situated in Basavanagudi, it has one of the largest idols of Nandi and according to a legend; the temple was built to appease a bull that would destroy all the groundnut crop of that area. The bull is supposed to have stopped doing the same after the temple was built and the villagers started holding a fair in its honour which is celebrated till date.

The worship of Nandi bull as an individual deity in its own right can be seen as a sign of the man’s dependence on cows and dairy culture as well as agriculture. A bull was a necessity both for agriculture as well as to ensure that the cow’s could be milked. Thus the significance of Nandi in the Indian pantheon cannot be undermined and projecting him as a perennially teary-eyed, sorry-faced figure, is – well, sad, to say the least!

Posted by This is Utkarsh speaking at 11:03 AM