Welsh myth of Ceridwen and Gwion


Here is an interesting Welsh1 Myth of Taliesin. 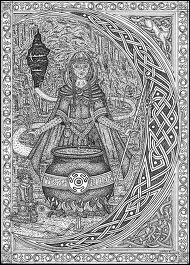 According to the myth, Ceridwen was a goddess (sometimes she is also referred to a witch), who had an ugly son. To compensate for his lack of looks, Ceridwen decided to prepare a potion, which on consuming would make him have all the knowledge of the world. However, the pot in which she would be making the potion had to be kept on boil for a year. At the end of the year, it would give three drops to consume and the rest had to be thrown away as it would be poison. 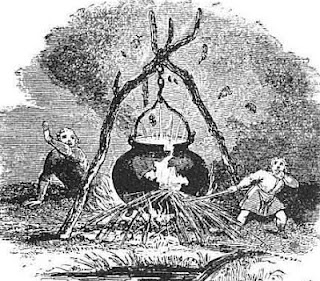 After setting the potion to boil, Ceridwen appointed one of his servants by the name of Gwion to keep a watch on the pot. At the end of the year, the potion bubbled over and the three drops fell on Gwion’s fingers. Feeling the heat of the boiling potion, he put the finger in his mouth out of reflex. He soon realized that he had all the knowledge of the world, because he had consumed the three drops of knowledge. He also realized that when Ceridwen would find it out, she would not leave him alive. So he ran from away from there. But Ceridwen soon caught up with him and chased him.


When Cerdiwen toke her usual form again, she realized that she was pregnant. She then decided to kill Gwion when he was born. But when the child was born, he was so beautiful that she did not have the heart to kill him. So she put him in a leather bag and set him in a river, where the baby was found by a prince and it is said that the baby grew up to be the legendary Celtic2 poet, Taliesin.


This is an interesting myth when we see it in details. 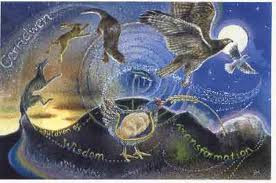 Cerdiwen, though depicted as a vengeful crone, has her maternal instincts intact. While she had noble plans for her ugly son, she doesn’t kill her newborn once he was born. Again a very universal depiction of a mother.


An interesting myth with many dimensions of hidden symbolism.


Taliesin went on to become one of the most renowned bards who is supposed to have served in the courts of about three Celtic kings. He was highly regarded during the mid-twelfth century and was the author of many romantic legends. It is also alleged by many historians that he had also served in the courts of the legendary King Arthur.


It is not uncommon to find mythical (or magical) beginnings of certain historical characters. Such births only go on to add credence to such great knowledge and also gives the character a certain degree of respect and following, stopping just short of deification. In India, the noted poet Kalidasa too was supposed to have had a certain degree of super-natural support behind his poetic genius. According to legends, he was a born fool, who was married to an intelligent princess. However, when she found out the truth, he was thrown out of the palace. Later Goddess Kali was supposed to have blessed him with wisdom, the result of which were some of the master pieces in Sanskrit literature.

1 The Welsh people are an ethnic group and native to Wales, which is part of
the modern day Great Britan

2 The Celts (pronounced as Kelts) were a group of tribal societies spread in
and around parts of Central Europe, France, Italy and nearby regions.
They had a very rich mythology, which is known as Celtic Mythology.
Posted by This is Utkarsh speaking at 9:53 AM