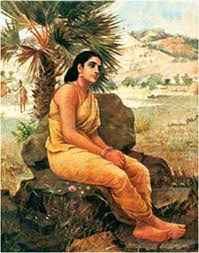 Shakuntala is one of childhoods most cherished and widely read romantic stories (or novels, depending on what one read). A sweet romance of a king who meets a damsel, express love, get married and part to return later. Enter an angry sage, who curses the lovely lady as a result of which the king forgets his lady love. Later Shakuntala goes to the court of the King, but loses the ring on the way, which finds itself inside a fish. The King is unable to remember his love, due to the curse of the angry sage, turns her away. The ring later finds its way to the King and he remembers everything and accepts Shakuntala and their child and all ends well.


Such a lovely story, which has its moments of love, separation, pathos and ends with ‘…..and they lived happily ever after’.


We get to read Shakuntala in two versions, first by Sage Vyasa in Mahabharata (Mb) and then later in the Sanskrit romance recreated by Kalidasa, in Abhigyana-Shakuntalam. The version mentioned above was a summary from Kalidasa’s version. Vyasa did not quite write the story this way. True to his nature, his Shakuntala was a smart, fire-brand woman, much like the later ladies of the epic Mb. It is important to understand Vyasa’s Shakuntala, as she happens to be the first major female character of Mb.


Shakuntala was the daughter of Sage Vishwamitra and apsara Menaka. Vishwamitra was a Kshatriya, who had undertaken severe penance to become a sage and Menaka was sent by Lord Indra, to disturb his penance, by seducing him. Post seduction, Menaka gave birth to a baby, but both Menaka and Vishwamitra deserted the baby, who was a symbol of victory for Menaka, and that of defeat for Vishwamitra. It is said that Sage Kanva found the deserted baby under the care of peacocks, and thus named her Shakunta-lalita, ‘shakunta’ meaning peacock and ‘lalita’ meaning in the loving care of, which was later shortened to Shakuntala.


Shakuntala was brought up by Sage Kanva, in his ashram, and soon grew up to be a beautiful lady with the looks of her mother, Menaka. Once Dushyant, the prince of Hastinapur came to the ashram to meet Sage Kanva and was immediately smitten by Shakuntala’s beauty. When he came to know that the Sage was away on a pilgrimage with some other sages and would return only after a few days, he expressed his desire to marry Shakuntala. The lady suggested that they wait for her foster-father’s arrival, but Dushyant expressed his inability to wait and suggested the option of gandharva-vivaha (a custom where the elders were not required as long as the two had decided to get married). At this, Shakuntala agreed with a condition, that the child born of her would be the heir to the kingdom of Hastinapur. Dhushyant agreed and the two got married and after consummating the marriage, Dushyant left without bothering to wait for Sage Kanva’s return. He left with a promise that he would send for her soon.


When Sage Kanva returned, he was apprised of the wedding. Soon Shakuntala gave birth to a son, who was named Sarvadaman, the subduer of all. When after twelve years there was no sign of Dushyant, despite the numerous missives sent by Shakuntala, Sage Kanva suggested that Sarvadaman be taken to the King as it was time for him to learn the ways of a Kshatriya. When Shakuntala and Sarvadaman reached the palace of Dushyanta, and introduced themselves to him, he had no recollection of any marriage.


There follows an extensive dialogue, where Shakuntala stands her ground. Dushyanta makes some derogatory remarks about her and Shakuntala retorts back that her only objective was to get her son the rightful place and not to lead the life of luxury. She reminds him of the true role of a king and how his acts would leave a wrong impression on his subjects. Her speech impresses the courtiers. To cut short the story, after a strong dialogue between the two, where Shakuntala berates the King and looks down on him as a King, the gods from the heavens intervened and came to the rescue of Shakuntala and assured Dushyant about the truth of the wedding. Dushyant then accepted both and it is said that Dushyant is supposed to have told Shakuntala that he had recognised her immediately, but did not give in as his subjects would not have been able to accept her so easily. The approval from the gods had made things easy and better.


According to the Vysya’s version, Shakuntala was brought up with the full knowledge of the fact that she was deserted by her parents at birth. Her agreement to Dushyant’s proposal did not need parental approval, she took her own decision. She even made a condition, which goes on to show that she wanted to ensure that her child was not neglected as she was once and got his rightful due. At the court of Dushyant, she is not seen fighting for her right, but for the right of her son, as is evident in the elaborate speech, which has the courtier’s spell-bound and at one stage they begin to believe her. She is depicted as an extremely confident and determined woman, out to get justice without breaking down.


Kalidasa used the angle of the curse and the lost ring to justify the ‘forgetfulness’ of Dushyant, while Vyasa simply went ahead and exposed Dushyant’s lustful rendezvous. Vyasa’s Shakuntala was not the damsel in distress shedding copious tears. She fought for her right and got her way, and did not succumb to the man, irrespective of his position and stature. She was amongst the first women in Mb, who fights for her rights in a man’s world and gets her due.


Just why did the nature of Shakuntala undergo such a drastic change from the fiery to the abalaa-naari? Does this also show the change in the perception of people? The status of women in the Vedic times was much elevated as evident in many of the leading ladies of Mb, who were in a position of some authority like Shakuntala, Satyavati, Kunti, etc. But by the Puranic times, her position had fallen and she became more of an appendage or a mere shadow of man.


While Kalidasa’s Shakuntala made good romantic, fairy-tale tear-jerker, Vyasa’s Shakuntala was more heroic and what a modern woman should be. The fire-brand version envisioned by Vyasa gives way to the tragic distressed woman of Kalidasa and unfortunately, the image has stuck on.


On this International Women’s Day, I hope the status of women is restored to the Vedic standards where we have seen the likes of Shakuntala who fought for her right and set the record straight with none less than a King.

The above paintings are from Raja Ravi Varma’s series titled Shakuntala sourced from Internet.
Posted by This is Utkarsh speaking at 9:20 AM